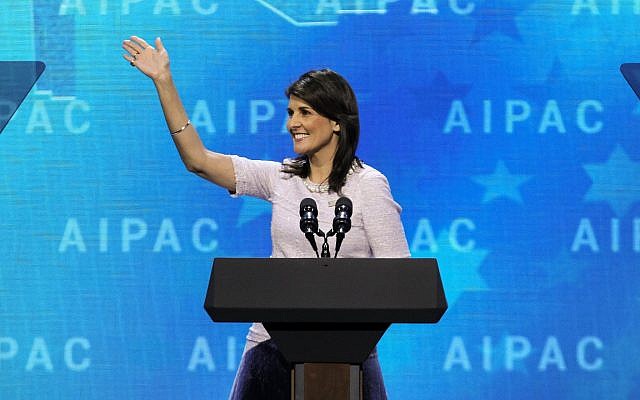 This past weekend while many here in Los Angeles were focused on the Oscars, I headed to Washington D.C. for the 2018 AIPAC conference. There I was able to listen to a multitude of key note speakers; my favorite of which was Nikki Haley. Nikki’s take on how Israel must not be treated like a temporary entity was eye opening and very well received. It is, partially in thanks to her that the U.S. is opening the doors to a new embassy in Israel, in the capital city of Jerusalem, which much of the world and a few of our last presidents have been hesitant to acknowledge due to conflicts in the area. She really said it best when she said “It can not be that only one country in the world doesn’t get to choose it’s capital city.”, a sentiment that has been shared throughout most of the United States. When the rest of the world accepts the reality that Israel is not going away, when this happens reasonable negotiated compromises can prevail over absolutist demands.

This conference was a momentous occasion to show the world that the United States stands behind Israel. Our Vice President Mike Pence spoke as did our ambassador to Israel David Friedman.

Supporters of Israel have come a long way this year, with the White House hosting and celebrating, for the first time, Israel’s independence day. Later, President Trump became the first sitting president to visit the Israeli Western Wall. In December, our United States government outwardly acknowledged Jerusalem as the capital of Israel. All of these firsts were celebrated by the Jewish community throughout the world. All of these shifts are not only symbolic in nature, but they also represent a shift in how the United States interacts with our closest ally in the Middle East, a relationship that has always been strong and transcended politics.

Overall my first AIPAC Conference was exhilarating and enlightening. Getting to share in this time of rapid change and growth for the Jewish community has been invaluable and I look forward to participating in more panels in the near future.